RAIN BARREL VOUCHERS ARE BACK!


As we continue to get more rain (thank heaven!), the Wichita City Council has delayed raising water rates or imposing fines for high water usage, though the restrictions will be revisited, perhaps in July.
Instead, conservation is the watch-word, and the city is finalizing details of a program that will offer rebates for purchases of high-efficiency appliances and smart sensors on sprinkler systems ($100) and rain barrels ($75). Stay tuned for the particulars — such as how many rebates per household, and is that cash or a credit to your water bill? — which may be known by the end of next week.
Coincidentally, Peter Daniels of Wichita Rain Barrels will be at Botanica on Wednesday to give a lunchtime lecture on rain barrels; it’s at 12:15 p.m. and included in Botanica admission. He’ll also have barrels for sale.
There’s never any reason, in any season, for wasting water, and we’ll continue in The Eagle to look at ways to use only what we need. Feel free to send me your ideas. I know that the drought has caused me to reassess my water usage — from not leaving the water running out of the hose while I run to shut off the spigot (a watering wand or nozzle with a shut-off valve is essential) to saving kitchen-sink water that otherwise would run down the drain, such as when I’m rinsing certain things out, for use on houseplants. The conservation has to be simple and quick for me to do it.
While the city government looks for ways to conserve water, I hope officials will nonetheless realize that people who may not be watering gardens at home — along with everyone else — do benefit from public fountains and gardens. Maintaining refreshing and beautiful communal areas is an efficient and good use of water. I hope that the fountains will once again be turned on, and that the city spends more, not less, on our public spaces.
The spring in other ways continues to be a Twilight Zone for me. I am grateful, above all, for the rain. And, after that, for the ability to have windows and blinds open. But temperatures in the 70s have not matched up with the fact that the pools are open and that I don’t have to slow down for school zones on my way to work. Next week’s forecast will take care of that, though.
In the meantime, because we haven’t had to water, and because rain has kept the soil moist, there’s no excuse for not getting after weeds this year. Squatting, bending, pulling — all these movements are good for people who sit at a desk all day. Those of us with back problems should probably still sit for weed-pulling, however. I don’t usually set aside time to weed. I just start pulling when I see what I don’t like, and go for a little while, until the next time, which had better be soon.
The weeds will only get harder to dig out, and the weather will drive us into the AC faster, as the summer unfolds. At least that’s how I remember it.

Options for the city

One of the comments that I get from some of my customers is "how can we make our rain barrel pretty?" We always give step by step instructions  on how to pain the rain barrels and in some cases will paint them for our customers. But we always encourage the customer to give it a try themselves, after all you can always repaint them if you are not happy. We are also going to be selling a new product for 2013. We have teamed up with a new small company here in Sedgwick County called Victory Gardens. Bryan Mann and Clay Johnson have started making Eco friendly long lasting raised garden beds with trellaces that can be attached for vertical gardening & the have started making rain barrel screens. The screen fits snugly around the rain barrel covering it up but still allowing the spigot to poke through for easy access.


Here is some impressive news and GREAT SUPPORT for Rain Barrel usage.
http://www.gridphilly.com/grid-magazine/2012/12/5/environmental-art-local-rain-barrel-takes-first-prize-in-nat.html#comment19313783

Posted by Peter Daniels at 10:50 AM No comments:


If you know of a show that you would like us to participate in let me know.
Posted by Peter Daniels at 10:22 AM No comments:

Kansas drought isn't easing up; forecasters optimistic for later in the year

An Article from today's paper here in Wichita Ks. Now is the time to start planning on how you will be using your water this summer. Rain barrels give you many options on being more conservative with your water. We also use soaker hoses so we are not watering areas of our garden that do not need the water. We have planted native plants that are drought tolerant and reserve most of our rain water for our season vegetables like tomatoes and cucumbers and beans. We also have our soaker hose go though the herb garden.

The intense drought that crippled much of the growing season for numerous states in the nation’s mid-section in 2012 is showing little sign of easing early in the new year, weather officials say.
But some Kansas forecasters retain hope that enough moisture will fall to provide for a decent winter wheat crop in 2013.
“I’m reasonably optimistic,” AccuWeather vice president Mike Smith said in an e-mail response to questions from The Eagle.
Long-range forecasts offered by computer models suggest precipitation levels will be normal from February through June, he said.
“That wouldn’t break the drought but it would give enough moisture for the wheat crop,” Smith said.
Smith said the main reason for his optimism is that the high-pressure dome that camped out over the heartland for most of 2012 shifted west – well out into the Pacific Ocean – in early December and shows no signs of moving.
“That is in nearly an ideal position to guide storms into our region,” he said.
Wichita and eastern Kansas need the moisture.
Salina’s rainfall for 2012 was more than 13 inches below normal and Chanute’s was nearly 10 inches. Wichita’s total was almost 8 inches below normal.
Since last summer, precipitation across the region is running 25 to 50 percent of normal, according to a drought information statement issued late last week by the Wichita branch of the National Weather Service.
According to the National Oceanic and Atmospheric Administration’s Palmer Drought Severity Index for Dec. 29, 6 to 9 inches of rain is needed in the eastern third of Kansas to break the drought. Most of the rest of the state needs 3 to 6 inches.
“This precipitation can not come all at once, but needs to arrive in staggered intervals in order to minimize runoff and maximize ground absorption,” the drought information statement said. “This will be tough to accomplish during the winter months due to historically less precipitation during the winter, and will likely need to wait until spring at the earliest.”
Indeed, the Climate Prediction Center forecasts the drought to persist in most of the western half of the U.S. through at least the end of March – from eastern Iowa and central Missouri west to the Pacific Ocean in southern and central California and the Nevada state line in northern California.
A wet winter and early spring – along with a growing season that ran two to three weeks ahead of normal – helped Kansas wheat farmers avoid the worst of the drought that began to set in by early summer, leading to a 38 percent increase in total bushels over the year before, according to Kansas Agricultural Statistics.
But warm temperatures and dry weather in the nation’s wheat belt had the current winter wheat crop in its worst shape in decades in late November, according to government officials.
While there have been spotty rains around Kansas in the fall and early winter, substantial deficits remain.
Water levels at most of the state’s reservoirs are down. Cheney Reservoir, for example, has less than 60 percent of its normal water capacity. Most of Cheney’s boat ramps are surrounded by land.
Soil moisture levels in early January ranged from 8 inches in eastern Kansas to 12 inches in western parts of the state, according to the Climate Prediction Center. That is 4 to 6 inches below seasonal normals.
The center projects below normal precipitation across the High Plains for much of the growing season, based on current weather patterns, said Jeff Hutton, warning coordination meteorologist for the Dodge City branch of the weather service.
“Precipitation on average will ‘probably’ be below normal again this year but perhaps not that far below normal,” Hutton said in an e-mail response to questions. “That being said, it will take several months in a row of above normal precipitation to diminish the severity of the ongoing drought.”
A snowy December – by western Kansas standards, at least – is a decent first step. Dodge City recorded 6.9 inches of snow, which is 2.8 inches above normal for December

Read more here: http://www.kansas.com/2013/01/07/2627817/kansas-drought-shows-little-sign.html#emlnl=Morning_Headlines_Newsletter#storylink=cpy
Posted by Peter Daniels at 8:16 AM No comments:

Posted by Peter Daniels at 10:01 AM No comments: 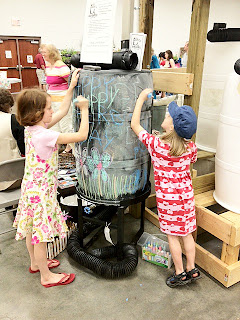 Posted by Peter Daniels at 10:00 AM No comments:

RiverCity WRAPS set up an informational booth at the Kansas Preservation, Energy and Sustainability Conference on Saturday, Jan. 28. Volunteers worked to educate the public about the importance of keeping our river, lakes and streams clean. The event drew nearly 600 people and featured 85 vendor booths.
Wichita Rain Barrels was another poplular booth for participants looking for ways to conserve water. “One inch of rain on a 1,000-square-foot roof can yield up to 623 gallons of fresh rainwater,” said Peter Daniels, Wichita Rain Barrels owner.
Westar Energy’s display featured several new electric vehicles. Wichita’s fleet of electric cars can now be charged at a new 240-volt charging station located in the north parking lot outside the Westar’s general office. Davis-Moore Chevrolet also displayed its new Chevy Volt. The Volt propulsion system is powered exclusively by electricity. Volt owners can even use a smartphone to access their vehicle’s electric range and fuel efficiency.